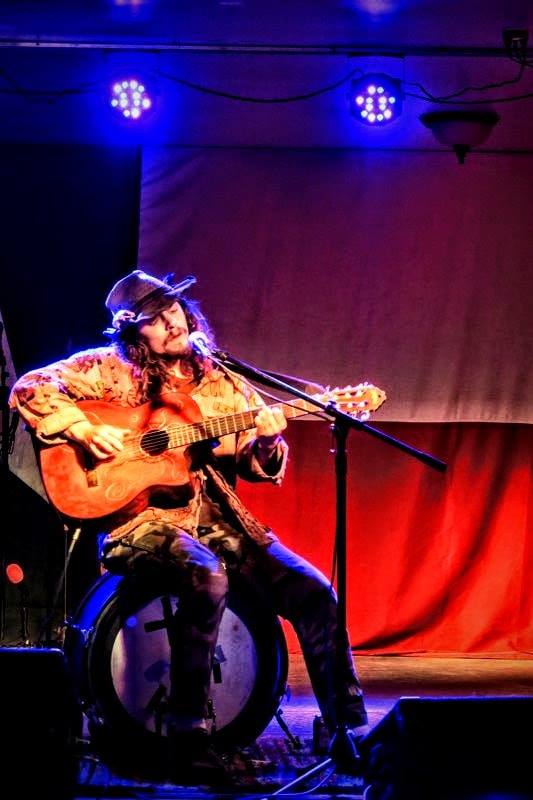 Eli Elkus is a rootin’ tootin’ modern-day American troubadour, serving up a musical concoction of vaudeville, freak folk, inlaw country and hobo jazz on various porches, street corners, coffee houses, fairs, festivals, backyards and music venues across the USA. The self-proclaimed wingnut calls his never-ending musical quest in his short bus (JeBus), the “TroubaTour”. He began sculpting his craft busking in the streets of Portsmouth, New Hampshire where his original “finger-flick” picking style reminiscent of folk and Americana started to take shape – influenced by Klezmer and gypsy music, eastern and western traditional folk songs, and the 20th century folk revival.

Elkus is quite the anomalous lyricist and no stranger to satire, telling romanticized tales of low-life characters and haunting horrors with a charm of tragic, hard learned, “once he knew it, it was too late” kind of lessons in his distinctive gravely (sometimes smooth and sometimes downright boisterous) tobacco stained voice. With a whimsical yet jubilant demeanor and downright absurd antics within and betwixt tunes touching on performance art, Eli will silence a room with a wistful ballad and then quickly rabble-rouse life into it once again; spinning in circles and foot-stomping his way through tales eager to be told. When Eli comes to your town, you’ll find him in a cozy nook between the real and nonsensical within the margins of society.