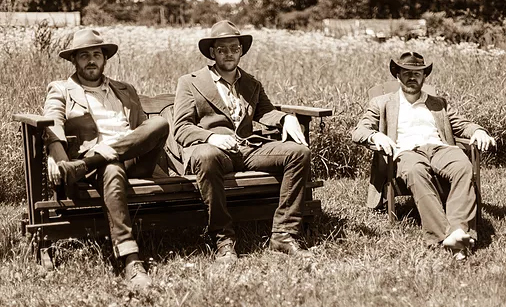 The  Kenny  Brothers  Band is an improvisational Mountain-Rock Band from the backwoods of Stratham, New Hampshire. Made up of three brothers, they perform original songs with roots in alternative-folk music, accompained by warm-hearted lyrics and earth derived grooves. The band was found in 2014 when all three of them realized they shared a true passion for music. It was time to move out of their parents basement and be heard by music fanatics alike.

Their debut album, Walk in the Woods, was selected to be in the best Seacoast music in 2016 according to the Seacoast Scene. “[Walk in the Woods’} weaves between trees, circles past the no trespassing sign onto the path less traveled and eventually doubles back home to sing about the adventure,” says Siri Undlin from Ear to the Ground Music. It was released in June 2016 and has recieved airplay from popular seacoast-based radio stations like 92.5 the River WXRV, 106.1 Portsmouth Community Radio WSCA, 94.7 WNHN, and has reached as far as KUCA The Bear, based in Conway, Arkansas, a college town outside of Little Rock.

Being brothers, Billy 28, Taylor 27, and Joey 22, they all grew up listening to their parents records while spending quality time in the outdoors. This as well as Joey’s adventures in Arizona, New Mexico, and Texas inspired the creation of their debut record. Walk in the Woods examines how nature is an escaoe from technology and modern pressures of society. Through stories about traveling, girls, self-doubt, and independence, The Kenny Brothers illustrate a way of life that has greater emphasis on passion instead of career. “One of the band’s greatest assets is their brotherhood. Growing up listening to the same music, along with their shared love of the outdoors, has made for a successful partnership,” says Charlie Weinmann from The Sound.

The band frequently sells out shows in the Seacoast NH area at venues like The Stone Church in Newmarket, NH, and The Press Room in Portsmouth, NH. The band of brothers have made it out of town to clubs like The Way Sation in Brooklyn, NY as well as maintaining a steady festival circuit, stopping at places like Wild Woods Music & Arts Festival in Croydon, NH. They are often known for having guest musicians including Dominic French on the organ, Jordan Tirrell-Wysocki on fiddle, and Matt Coyle and Jack Paone on the horns. The often integrate acoustic sets into their live shows, providing a variety of musical tastes every night. An article by Chris Hislop from the Seacoast Scene writes, “the group has quickly become a stape on the regional live music scene.”